Take A Side Against Sexual Abuse in the Family 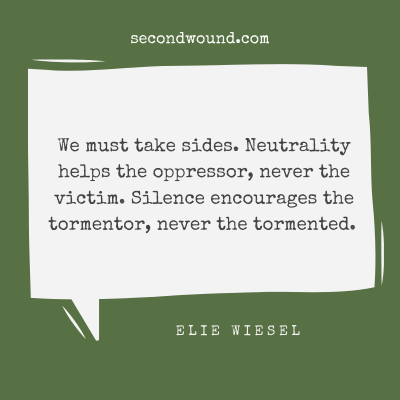 Growing up in Second Wound families, I think many survivors learn to take what they can get. They are taught not to ask for much. And they don’t dare complain for fear of being shamed and blamed. It’s safe to say they are not allowed to have strong voices within their families.

Perhaps these experiences lessen the shock when family members claim they “can’t take sides” between survivors and their abusers. But really, they should be shocked. It’s a response I hear about again and again. Loved ones don’t care to get involved. They want to keep peace in the family. They ask survivors to forgive and make up with the abuser. They urge them to pipe down so they can brush sexual abuse back under the rug where it has lived all this time. Hidden from scrutiny, accountability, and their chosen reality.

“Neutrality” is an outrageous reaction to a crime committed against a member of the family. Sexual abuse is a soul-crushing, insidious, heinous violation that has lifelong, damaging effects. It is an abuse of power that one person chooses to inflict upon another. There is no excuse for family members to treat abuse as though it’s equivalent to a difference of opinion between victim and perpetrator.

Survivors are doubly, deeply, hurt when loved ones fail to stand up for their needs and protect them in the aftermath of abuse. They feel re-victimized when loved ones claim they need to stay neutral. The pain this causes is far worse than most family members ever realize. And yet, it happens all the time.

Standing in support of the victim is the only acceptable choice. Family members have an obligation to hold abusers accountable, to tend to the needs of victims, and to confront sexual abuse in the light of day. Survivors need and deserve their loved ones’ ongoing support and compassion as they work to heal from their trauma. Their family members need to understand that addressing abuse directly is the only way to prevent the cycle from continuing.

The reasons family members fail to stand with survivors are varied and numerous but declaring neutrality lets abusers off the hook. It is essentially the same as taking the perpetrator’s side, for it treats abusing someone as equivalent to calling out abuse. But these two actions are nowhere near equal. The first is a morally indefensible crime by a perpetrator who knows right from wrong. Calling abuse out is a brave act that exposes wrongdoing and danger. It’s a step toward healing from trauma. It may be messy and unpleasant–and that is understandable.

Family members often excuse perpetrators in the family by pointing to their personal struggles or conversely, holding them up as the revered figure or golden child in the family who can do no wrong. Some do both. Meanwhile, they might criticize survivors for expressing hurt and anger about the abuse and get exasperated when they ask to attend family functions without their abuser. Many loved ones outright fail to believe survivors at all.

As a personal coach for Second Wound survivors, I can report that most of the families I observe who claim neutrality end up actually standing with abusers and against survivors. Especially when survivors refuse to retreat back into silence, allowing their family to avoid the ugly truth.

I understand the origin of some family members’ failure to side with survivors. As a social worker and a compassionate person, I can extend empathy to them. That being said, I feel strongly that taking a neutral stance in the face of sexual abuse is the morally wrong choice. It turns a blind eye to injustice and harm. Crucially, it enables abuse by putting others at risk of victimization by the perpetrator. After all, we know that when there is one victim, there are often more. This is a hard truth for family members to accept but one that must not be ignored.

It takes courage to do the right thing. Survivors who disclose abuse know this firsthand. They make a choice to speak up–often despite being raised to keep quiet–so that they can face their truths and stop the cycle of generational trauma. They only ask that our family members exercise enough courage and moral strength to stand by them now. To take a side against sexual abuse and for survivors. That is the right and loving thing to do.

Your ticket for the: Take A Side Against Sexual Abuse in the Family

Take A Side Against Sexual Abuse in the Family