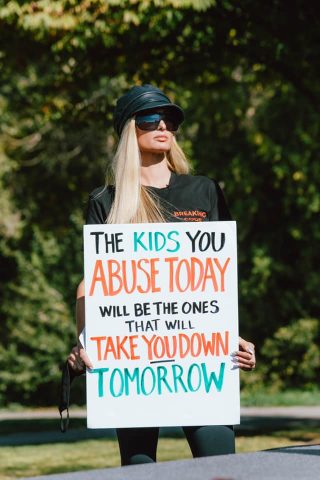 Raising a teenager is hard. Being a teen is even harder. Many, if not most, kids at some point in their teenage years will struggle emotionally, act out unpleasantly, and experiment with risk-taking. Most of these behaviors are developmentally normal, part of the transition into independence and adulthood. Others are indications that the teen is struggling with deeper challenges and they need extra support. But parents often discover they are the last person their teenager wants to confide in or listen to for guidance or advice.

Into this unsettling mix comes the ‘Troubled Teen’ industry offering hope and help to desperate, scared, and frustrated parents. Alarmingly, this vast network of residential facilities does NOT help families in need. Despite what they tell parents with their sophisticated sales pitches, they are not therapeutic. They’re not even safe. Using behavior modification and abusive practices, they break children down until they have no choice but to comply. They traumatize kids under the guise of saving them.

These programs need to be stopped and the public needs to know the truth. You can help by getting the facts, warning your friends, and speaking up. Please read the words of guest bloggers Chelsea Maldonado and Amanda Simmons who are experts on the ‘Troubled Teen’ industry. I am immensely grateful to Chelsea and Amanda for sharing their story with me and Kathryn Robb on the Truth and Consequences podcast. They are survivors in every sense of the word. -Miranda

The Troubled Teen Industry (“TTI”) is a catch-all term loosely applied to privately-owned residential facilities for youth located throughout the United States and abroad. These programs have operated for over 50 years and include a broad range of institutions including therapeutic boarding schools, wilderness therapy programs, faith-based academies and residential treatment centers.

Because facilities within the Troubled Teen Industry do not operate as traditional schools, detention centers, group homes, or psychiatric hospitals, they are regulated through a patchwork of State laws and have few, if any, data-sharing obligations. While this makes the full scope of the industry difficult to quantify, the American Bar Association estimates that the TTI is a multi-billion dollar industry with the capacity to serve hundreds of thousands of youth annually.

The first TTI programs began operating in the 1960s, pulling many of their founding members and methods from the controversial anti-drug cult Synanon. These early programs purported to cure addiction and modify behaviors by housing children in highly restrictive environments and subjecting them to various forms of large-group awareness training, attack therapy, and experimental psychology.

By the early 1970s, the tactics used within Troubled Teen Programs began to garner the attention of the Federal Government. Testimony given to the Senate in 1974 described the methods used at one TTI program, The Seed, as extremely coercive and “similar to the highly refined brainwashing techniques employed by the North Koreans.” Though concerned by the potential harm these tactics could cause when applied to vulnerable children, the government did nothing to stop their proliferation.

Many of Amanda’s experiences at John Dewey Academy in the 1990s mirror those used at The Seed. Like The Seed, John Dewey Academy was an early offshoot of Synanon and widely regarded as a thought leader. While attending John Dewey Academy, Amanda was subjected to highly confrontational attack groups that felt like psychological torture and spent weeks in isolation, both methods reported on extensively in the 1974 testimony given on The Seed.

In 1979, the Senate received detailed testimony on Provo Canyon School, a Troubled Teen Industry institution still in operation today. Investigators reported that Provo Canyon School was using militaristic orientation methods that would “scare any adult” and criticized its use of hired services to involuntarily transport youth to the facility in the middle of the night. Again, the government took no action to curb these practices. Decades later, entrepreneur and activist Paris Hilton testified that she was traumatized by Provo Canyon School’s use of involuntary transport and brutal treatment.

Just as John Dewey Academy modeled itself after Synanon and The Seed, other programs began to model themselves after Provo Canyon School. Tranquility Bay, the facility Chelsea attended in the early 2000s, was operated by former Provo Canyon School employees and utilized many of the same behavior modification tactics. While attending Tranquility Bay, Chelsea experienced attack therapy and large group awareness training. She witnessed the use of brutal restraints and isolation. The same tactics discussed in the 1970s were still occurring in the 2000s.

In 2007, the Government Accountability Office released a damning report entitled  “Concerns Regarding Abuse and Death in Certain Programs for Troubled Youth,” which investigated thousands of claims of abuse and death in private residential facilities for youth. The report appropriately concluded that in many of the cases where youth had died, ineffective management played a significant role. The GAO released similar reports in 2008 and 2009. Despite these reports, the Stop Child Abuse in Residential Treatment Centers for Teens Act, legislation first introduced by Congressman George Miller and later championed by Representative Adam Schiff, failed to pass multiple times.

Chelsea and Amanda’s experiences in the Troubled Teen Industry are far from unique. Strip searches and sexual abuse are a regular occurrence, with some survivors, including Paris Hilton, reporting additional violations like forced pap smears and gynecological exams.

As we embark on another Senate investigation into the Troubled Teen Industry, we must ensure that we finally take action. We can start by adopting the practices recommended by the GAO in their 2022 report and continue by supporting the soon-to-be introduced Stop Institutional Child Abuse Act.

The government knows — and has known — about the abuse occurring in Troubled Teen Industry facilities. It is now time for action. Children continue to die and experience horrific abuse in TTI programs. Doing nothing is no longer an option.

Your ticket for the: A Troubled History