Making Change from Inside 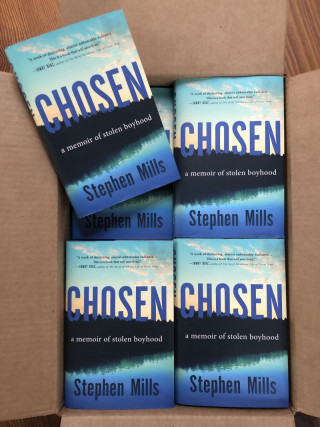 My advanced copy of CHOSEN: A Memoir of Stolen Boyhood arrived on my front stoop on a recent Friday afternoon. By Sunday morning I had read all 318 pages. I’d also filled the back of the book with tightly-packed, handwritten notes in an effort to capture the thoughts and emotions that bubbled up as I read Stephen Mills’ poignant account of surviving sexual abuse as a young teenager.

One of the many advantages of being friends with outspoken advocate and attorney Kathryn Robb is her talent for bringing remarkable people into my orbit. Stephen Mills had met Kathryn through their shared efforts to combat the dangers of sexual abuse. After she encouraged him to reach out to me, Stephen generously ordered an advanced copy of his memoir to be sent to my home in Connecticut.

For two days I read practically non-stop, carried along by the riveting story and moved to tears by Stephen’s artful writing. As much as our stories differed, I felt a kinship with him that I believe only survivors can truly understand. I also realized this book had the potential to make a significant and positive impact. The nuanced detail with which Stephen captures the torturous aftermath of sexual abuse will be familiar to many. For others, I hope it will be revelatory.

A couple of days after I finished his memoir, Stephen and I were on the phone. It is a rare privilege to spend an hour speaking with the author of a book one has just devoured. Even more so when it holds great personal meaning. CHOSEN ignited my outrage for young Stephen over the crimes his abuser committed against him. It also touched a sorrow inside me that I have carried since my own traumatic childhood experiences. When I expressed to Stephen what his book meant to me, he was humble and gracious.

We also discussed the importance of some little-understood truths his memoir illustrates about child sexual abuse.

He captures the devastating psychological effects that, untreated, create an emotional stranglehold upon the way victims see themselves and move through the world. Shame, depression, and anxiety are nearly universal and they manifest as self-loathing, panic attacks, hyper-vigilance, and struggles with intimacy, among other symptoms. Flashbacks, nightmares, dissociation, and addictions are also common among victims, as are suicidal thoughts and actions.

Stephen shows us what these repercussions feel like from inside the life of a survivor. His account is painful to read and obviously, even more terrible to live. But this is precisely why stories like his must be told. To prevent child sexual abuse, we need to understand it.

Fortunately, the general public knows more today about red flags and the grooming behaviors of sexual offenders than in the 70’s when Stephen was abused. Dan Farinella, the revered social worker and camp director who preyed upon him, used textbook methods to befriend and victimize boys. The power of CHOSEN is that it gives us a close-up view of how a predator crafts his persona to win the trust and admiration of not only Stephen’s parents–who were enthralled by Farinella–but also campers and counselors, his professional peers, and the community he lived in. We see the repeated failures of institutions to stop Farinella’s campaign of terror or even hold him accountable, despite the fact that his abuse of boys was an open secret among campers and counselors.

We watch as Farinella normalizes his inappropropriate behavior to Stephen and makes him feel complicit in his own abuse. He takes advantage of Stephen’s desire to please and get approval. He puts himself on a moral pedestal to appeal to Stephen’s interest in social justice.

Farinella takes Stephen under his wing, confides in him, and makes him feel special. Along with this special treatment he creates an underlying fear of harm that keeps Stephen from speaking up. In fact, it compels Stephen to rationalize Farinella’s behavior, a common and self-protective coping mechanism that sexual predators use to psychologically trap and silence their victims.

Stephen had no chance against his well-honed skills. Tragically for all of the boys Farinella abused, they also had no way to understand, vocalize, or process what he had done to them.

In the decade or so after the abuse, Stephen shows us the poisonous effects of child sexual abuse and how it seeps into every aspect of his life. Reading CHOSEN feels like an answer to  the reflexive question: “Why don’t you just move on?” Stephen’s troubled aftermath shows us the reasons with piercing accuracy. He tries every way he knows how to move on. Eventually, he learns that the only path to relief is to move bravely through the truth and the pain, a fact that most of us discover the hard way. Stephen then walks us through his painstaking recovery, rewarding our faith in his determination to heal, and offering hope to fellow survivors.

I closed my copy of CHOSEN filled with another kind of hope as well: that Stephen’s masterful writing will attract a range of readers who are intrigued by his story, but end up gaining vital insight about how sexual abusers work as well as the insidious effects of this pervasive crime for those of us who lived through it.

That is how victim-blaming ends, and change begins.

Listen to the Truth and Consequences podcast (Season 3 Episode 5) to hear Stephen Mills speak with me and Kathryn Robb about CHOSEN.

Your ticket for the: Making Change from Inside

Making Change from Inside