The Brave Women Behind The Keepers 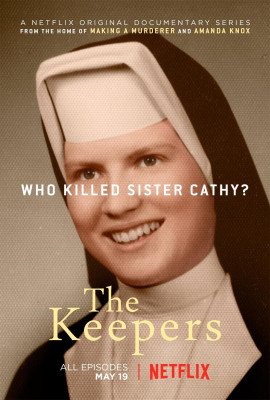 It took me five years to get up the nerve to watch The Keepers.

I knew enough about the critically acclaimed 2017 docuseries, and the web of crimes it revealed, to understand how sad and rage-inducing I would find the events it follows. What I did NOT know was that by putting off watching this beautifully made and important story, I was missing out.

Then, a few weeks ago I heard Gemma Hoskins on the podcast Let the Women Do the Work with Gillian Pensavalle. She talked about her experiences, along with Abbie Schaub, as grassroots investigators whose diligent truth-hunting was a focal point of The Keepers. The jaw-dropping twists and turns they described quickly caught my attention and I was captivated by Gemma’s strong, empathic personality. That night, I finally cued up the series on Netflix.

I learned that Abbie and Gemma had made up their minds to look into a connection between the murder of their former teacher, Sister Cathy Cesnik, and the systematic sexual abuse of girls at their prestigious Catholic high school. There is so much more to this story, including the murder of 20-year-old Joyce Malecki and coverups by multiple entities to sum up here. Suffice it to say I devoured The Keepers in one weekend. I was deeply moved by it. I was also impressed by all the women (and men) who fought to do the right thing in the face of almost unimaginable crimes, Sister Cathy maybe most of all.

As I watched, I texted my friend and co-host Kathryn Robb repeatedly, expressing, in turn, my horror, sadness, and admiration. Kathryn has worked with Abbie Schaub as well as attorney/survivor Teresa Lancaster, one of two courageous survivors who sued over sexual assault by priests at the school. I was thrilled when Kathryn offered to invite Abbie, Teresa, and Gemma to come on the podcast and they all graciously agreed. We spent a riveting hour talking about their personal experiences as seen in The Keepers, the work they have been engaged in since the docuseries aired, and several updates on aspects of the sexual abuse and murder cases. It was a great conversation.

Gemma pointed out that it has been five years since the release of The Keepers and while much has happened, there are far too many unanswered questions. Justice is still far off for many people involved, living and dead. And so today, with her signature determination, Gemma is writing to news outlets imploring them to revisit the people and events behind the series. With her permission, I am printing her letter here because it includes important details we did not cover in the Truth and Consequences podcast episode.

At the bottom of this post, you will find links to the continued work of Gemma, Abbie, Teresa, and other people related to these events who are trying to make the world a better place. We support all their efforts. I think you will too. -Miranda

Greetings from Ocean City, Maryland.  My name is Gemma Hoskins.  You may recognize me from the 2017 Netflix docuseries, The Keepers.  Since 2006, I have been working diligently with others to find out what happened to our precious teacher, Sister Cathy Cesnik.  Her murder has never been ‘solved’.  We believe that Cathy was murdered because she was aware of abuse that was occurring in the all-girls catholic school, Archbishop Keough in Baltimore, Maryland.   I am writing to ask for your help.  Those of us involved in this grassroots investigation are being stonewalled at every attempt.  The sexual abuse at Keough was part of a huge criminal network of drugs, abuse, and prostitution.

It is time for answers. No more secrets.  No more cover-ups.  We need national media attention on this heinous situation.  The following review of the events of the last 5 years since The Keepers was released will give you an idea of where we are in this mission to find justice and resolution.   I am available to talk to you by phone or email.  The world is watching and waiting.  Please do your part to assist us.

The Keepers was released 5 years ago on May 19. Where are we?

Where are they/we/you in all of this?  All of this because this woman at the age of 26, took on the devil to save her broken angels.

The beat goes on.…

Read Gemma Hoskins’ memoir, Keeping On: How I came to Know Why I Was Born

Read updates from The Keepers story on the Facebook group “The Keepers Official Group – Justice for Catherine Cesnik and Joyce Malecki”.

Learn about the legislative strategy to reform Maryland’s statute of limitation laws and sign up for news notifications. (It will be updated soon as they prep for the 2023 legislative term.)

Your ticket for the: The Brave Women Behind The Keepers

The Brave Women Behind The Keepers